A few weeks ago, I was scrolling on Instagram and noticed a reoccurring blue and orange logo on my timeline that read ‘Hope’. I read the captions, watched the stories, and eventually landed on the original post. Dennika and I have run in the same circles literally our entire lives. We share quite a few friends, our fathers have known each other for years, and we’ve had similar experiences when it comes to church. You see, Dennika is also a PK.

Last summer, Dennika was diagnosed with Multiple Sclerosis. She recently took the plunge of not only telling people but also launching a t-shirt campaign to help with her medical expenses. As someone I’ve known since…forever, I wanted to not only support her (already copped my t-shirt) but also give her the opportunity to share and educate. I reached out and asked if she would be willing to share her story.

The two of us talked about everything from the woes of adulting to our crazy experiences as pastor’s kids, and of course her diagnosis. Thank you to Dennika for being willing to be my first interview EVER and for being open and honest. Check out our conversation below!

When did you first know something was wrong? How much time passed between your earliest symptoms and your actual diagnosis?

I first knew something was wrong when my feet got numb and the numbness wasn’t subsiding and getting worse. I especially knew something was wrong when, I would touch my leg and it felt like I was touching someone else’s leg. I would say about ten months passed between my earliest symptoms and my actual diagnosis. From the beginning of July (2017) to the end of May the following year.

The scariest part of my journey was when I lost my eye sight because it’s really frightening to wake up, not be able to see out of one of your eyes, and not have a clue as to why.

The most frustrating part would definitely have to be the comments from people saying, “You look fine”, “Nothing seems wrong”, or “Omg! I read this article about…”, not knowing that I was struggling so much emotionally already.

How has the physical, emotional, and financial impacted your faith? Was there ever a time when you were mad at God or asked just what He was up to?

Physically, many times I am exhausted, sometimes more than I want to admit because I don’t want to give in or feel “lazy”.

Emotionally, I want people to understand the deepening of my spiritual walk started after I graduated in 2015. I would have so many breakdowns because life was taking turns that I never really expected and honestly, a lot of my deepest fears of post undergrad life, came into fruition and multiplied by 100. I believe in my heart that God used all the ups and downs and the desires of my heart to truly shape me and prepare for this point in my life. I look back and still only have one answer as to how I made it through, faith and trust in Him.

Financially, I’m not sure who was prepared, but it sure wasn’t me. Through my seasons when I didn’t have as much as I wanted to, I realized what a  blessing it to be able to walk into the store, buy everything you need and even some of what you want. I know many people struggle  with returning tithe and offerings, I found it to be my way to say “thank you”, He doesn’t have to do anything He does for us, but He does. It’s just that simple for me. I have to say that I have ALWAYS had everything I needed. It could’ve honestly been worse. I could’ve been destitute but He kept me.

There were times initially where I was a little upset, maybe not mad at God, but I would be a lot more annoyed and withdrawn than usual. When it would get really really hard to keep the faith, when I felt as though everything was going wrong, I would talk to God and say, “You’re really going to have to help me to keep on believing because I can’t see the light at the end of the tunnel.” Ironically somehow, someway, thankfully, He would show me.

I know how much you value your privacy, how hard was it for you to decide to go public with your diagnosis? What ultimately made you decide to launch this campaign?

It was extremely hard to even decide to go public. For eight months I couldn’t even say, “I have MS” without crying. I’m not really someone who cries easily, so I knew it was important to take my time and process this because, unfortunately Multiple Sclerosis is “for life”. I decided to launch this campaign because I wanted to do something that represented me, that would be helpful to me financially, and of course something I could share and people could be apart of.

I LOVE NEW YORK, people are probably are sick of me saying that. It is home, it is a huge piece of my heart and made me part of  who I am. I chose my design carefully. My brother drafted a bunch for me, but when I saw it, without a doubt I knew it would be a contender. I wanted a teal blue to represent the Caribbean water where my parents are from, Jamaica. The orange was for my favorite time of day, sunset and of course the color that represented, MS. I also wanted people who wore my shirts to know that they’re on a team with purpose and “HOPE”. One of my fondest memories as a kid was going to baseball games with my dad. I would have so much fun and I’m a NY Mets fan because of it. Please note, I have nothing against the Yankees. 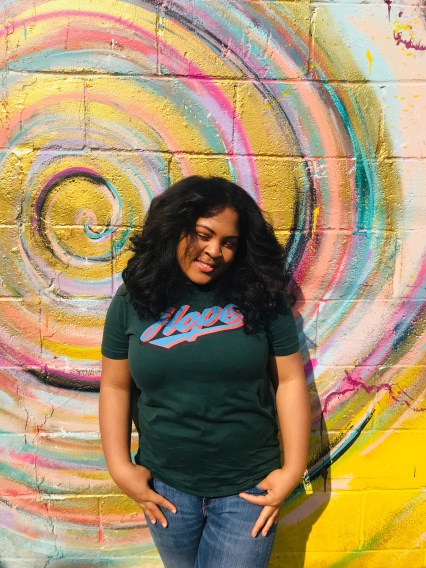 Life as a PK

We live very public lives as pastor’s kids and sometimes we want our business to remain…our business. Was there ever a time that you considered keeping your diagnosis a secret from your church? If not, how did you want to “announce” it?

I NEVER wanted to tell the church because to be frank, some people just don’t know how to act or talk to people. There’s a serious entitlement to MY dad that church members tend to have and I’ve had my several misgivings about that. I was more okay with the congregation just casually being the last to know. I didn’t spend much time there to be able to confide in anyone there at the time. Plus I’m super protective over my parents.

You told me one of your favorite sayings is, “Sometimes even the best intentions lack good judgement” and I think it especially applies in church. This part of your story is a classic example of the balance of public and private life every pastor’s family must find. How did the saints find out about your diagnosis?

Sometimes even when we think we have a solution, we can create a problem. After I told my dad about my diagnosis, he didn’t take it too well. He confided in a group of elders at his church and they would pray for me from time to time. Unfortunately one of the elders took my diagnosis into “their own hands”, and announced I was very sick in front of my dad’s congregation. I. WAS. HEATED.

As many people know, you NEVER know who is in the congregation so caution is necessary. I was more upset because I didn’t even tell some of my closest friends as yet or the majority of my family because I was still processing. I didn’t want the ones closest to me to feel as though I lacked honesty. I felt as though it was a very pretentious move on their part and could’ve caused discord between me and my father’s relationship. Aren’t we glad I know better!?

Some things just can’t be undone. At that point I wasn’t sure how I would tell people but I knew the fundraiser would be the most authentic way to me. It wasn’t necessarily a matter of “if”, but “when”. We’ve moved past all misunderstanding, thankfully.

I tell people that in order to survive being a pastor’s kid, you have to compartmentalize “church” into several boxes- theology, politics, culture, and spirituality. Pastor’s kids are among the best theologians and can debate anyone on just about anything at a moment’s notice. We make great politicians because we’ve learned to navigate the politics of church. Then there’s culture- the customs, rules, and traditions that have followed us our entire lives. Then of course there’s the spiritual side and each of us have our own unique journey. In your opinion, what’s the best thing about being a PK? What is the worse thing about it?

Eating at the Pastor’s table….just kidding. For me, I’m really happy when people take the time out to appreciate the many sacrifices my dad makes, as well as my mom. A lot of time away from family and important days go into all of this with barely a thank you, or any financial gain.

Hmmm…. the worse….I would say is boundaries. Some people do NOT have them. It can be upsetting to have to explain to adults that they’re out of line, and their place is not in our family circle. Only the people in it understand and we have to protect it at all costs.

Who are the people who have been your biggest source of inspiration and support?

As for inspiration, Tamia, the singer. She is my absolute favorite. I first learned about MS from her back in 2013. It’s just ironic that’s she’s been that inspirational before my diagnosis. For support, my family, my family, my family. They have come through in more ways than people know. There’s so many of us on both sides, so there’s a lot of love.

You’ve made the decision to try your hardest to live a normal and healthy life. What do you look forward to the most?

I look forward to definitely reaching more of my potential health wise. Definitely finding a career that can make this world a better place to live. I love kids and have such a desire to be a mom. Being a wife would be cool too…lol

What would you tell someone who knows absolutely nothing about MS?

MS has so many faces, so many colors and many appearances of courageous men and women who have made up their minds to fight for a better quality of life. A lot of us aren’t covered by insurance and are mainly supported through fundraisers and donations for expenses and research. They say there’s no cure, I believe that’s going to change sooner than later, and I’m going to see it.

Dennika and I talked for quite a bit- you just might be hearing more from us in the future. I shared my stories of navigating pierced ears around Adventists. She told me about the church member who said she’d get better if she became vegan…because of course vegans have all the answers. But before anyone pulls out an Ellen White quote, Dennika was sure to clarify, “I’m definitely open to an overall healthier lifestyle, I like to be balanced.”

We also both admitted that there have been times when we’ve tried to convince our fathers to get OUT of pastoral ministry…we may or may not still be trying. If you can, please support Dennika’s campaign. Here’s the link!

And in case you were wondering, eating at the pastor’s table is EASILY top five best things about being a pastor’s kid. 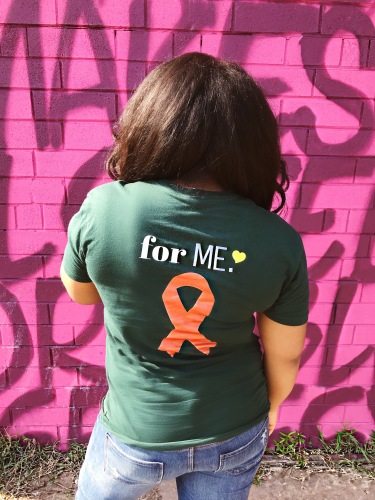